In my previous post, I discussed Visual Studio Integration, IronPython and how difficult it was to get started. However, I came across an application called IronPython Studio (Colin also pointed it out on the comments) which uses the Visual Studio 2008 Shell to provide a IronPython IDE. You can download the application from http://www.codeplex.com/IronPythonStudio.

On my first attempt to install the application, I was greeted with this error message:

Turns out you need to have Microsoft Visual Studio 2008 Shell (isolated mode) Redistributable Package (http://www.microsoft.com/downloads/details.aspx?FamilyId=ACA38719-F449-4937-9BAC-45A9F8A73822&displaylang=en) installed which the installer doesn’t check for, this is a 384mb download.

Installing this, I found that it doesn’t actually install it – if I had actually read it correctly I would have read that it was just extracting.  I then had to go into the directory where I had extracted it to (C:VS 2008 Shell RedistIsolated Mode) and run the real installer (vs_shell_isolated.enu.exe).  I then uninstalled and reinstalled IP Studio without any problems.

Upon launching Iron Python Studio, I was greeted with a very familiar feel to Visual Studio. Going File > New > Project gave me the same options as was available in the VS 2008 SDK integration. 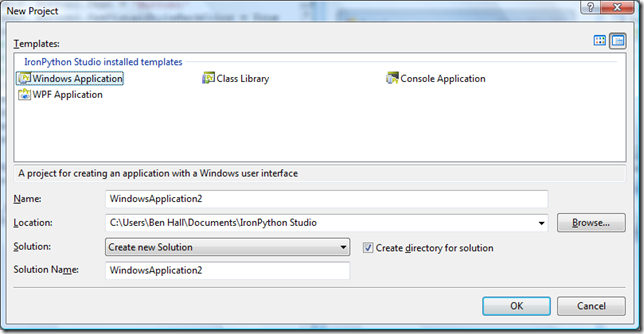 After creating a new Windows Application, it looks and feels the same as VS so you won’t have any trouble navigating around.  There is some intellisense (it didn’t like System.Windows…) and the syntax highlighting seems to work.

You can build and debug just as you would for Visual Studio 2008 and C#.  It is a good application to have around, however for now I think I will stick with ipy and notepad2. The fact you need the VS2008 Shell installed at 385mb is another fact which turns me against this.  It’s a shame they didn’t just release it as a VS Package which could plug straight into VS2008.