Last night I was doing some experiments with xUnit and TeamCity. TeamCity has a nice UI for reporting tests, however by default it only supports NUnit. Luckily, extending this to support other tests is easy as it just listens for MSBuild outputs in the right format (##teamcity[testStarted name=’Test1′]).

This worked and my tests where appearing in the report. 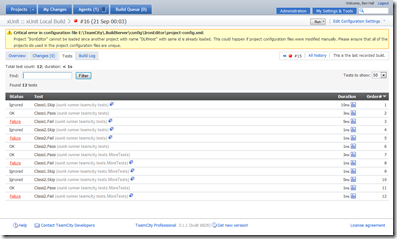 On the other side of the ocean, Brad was actually working on extending the existing xUnit MSBuild runner for TeamCity integration.

The advantage of Brad’s runner is that you don’t need to edit your MSBuild script, as long as your using the xunit msbuild task it will know when TeamCity executed the build and log to the correct place. Otherwise, it will log to the standard MSBuild output – very cool! 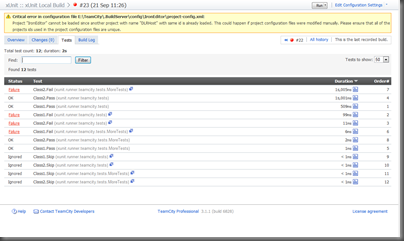 If you want to use this today, download the source code from CodePlex and build it yourself (Get3rdParty.cmd is a great script to run before you build), but I suggest you wait for the next release (1.0.0.4), where support will be included.

Documentation on how to use the MSBuild task can be found here, as I mentioned, using it via TeamCity is no difference.