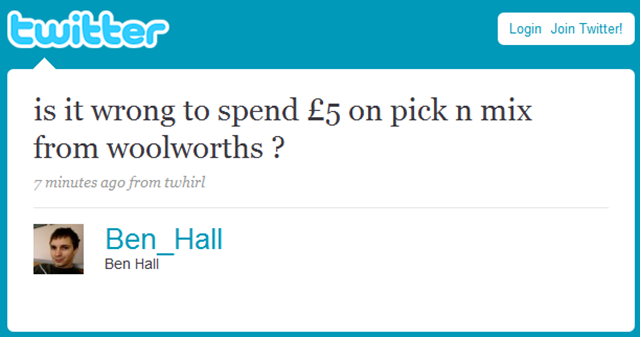 This is the question of the day! For those of you not in the UK, Woolworths felt the force of the credit crunch and went into administration, closing its 807 stores. Woolworths was a national treasure, opening it’s first store in 1909 (http://news.bbc.co.uk/1/hi/in_pictures/7801807.stm). It’s still a sad sight to walk past an abandon store bearing it’s name.

Woolworths was a very well respected brand, however lost it’s way and as a result the product line became confusing – they sold everything and anything?  The stores became confusing and you lost the joy of entering, which I’m sure many of you experienced as a child. Their community moved onto stores like Tesco and as such there was only ever going to be one way it ended.

However! Today it has returned, as a online store at least. But that’s not the interesting part. After seeing the outpouring of love for the brand with people paying £14,500 for the last bag of pick n’ mix, @team_woolies started to utilise social media to connect this loyal following and build a community. @team_woolies have been utilising twitter, facebook and other social media sites to connect the huge following around the brand.

By building a Social media platform, they have allowed people to share their love of pick n’ mix and all things Woolworth! This has created a huge buzz around the brand that has has got people talking amongst themselves and the different aspects and what they loved. The team could have purchased TV and print ads and attempted to force the new relaunch onto people – this would have failed. It would have cost huge amounts of money and most people would have ignored the ads.

Social media has allowed them to build awareness, promotion and a buzz. The results is that they have created a huge buzz around their relaunch with lots of people talking – without Woolworths having to do anything! 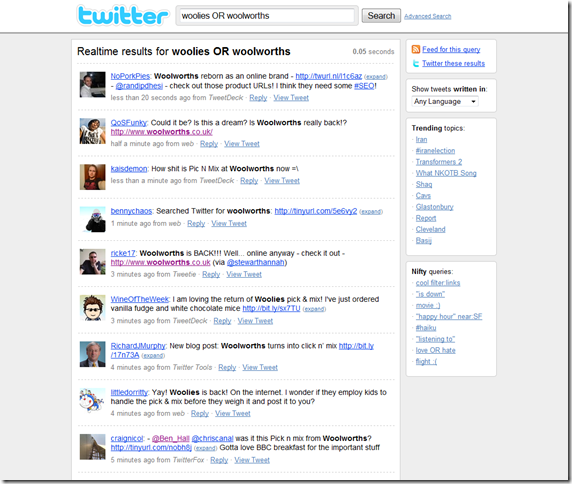 The Woolies HQ site provides a personal touch to the site and has even gone as far to use Last.fm and Spotify to create Radio Woolies. While they are little things, together they build a great way to engagement with users. 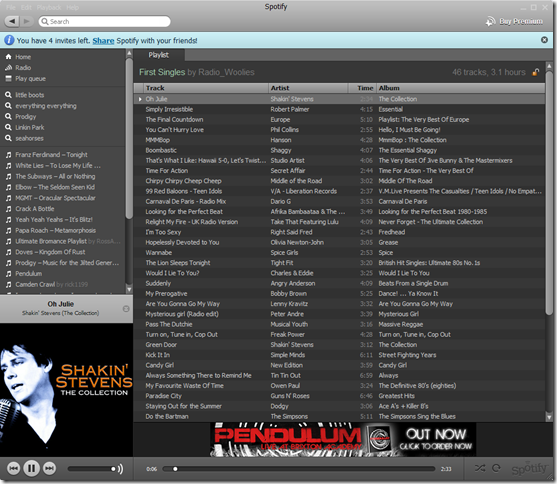 Some would consider Radio Woolies just to be a cost centre – a pointless exercise that will never return any money. That is not the point!  The point is to engage. Allow people to feel connected, involved and important. Little things which make people smile are worth the effort for a company to get right! If people love you, then you’re sure to be a success.

Now they have launched, I hope that they keep the buzz alive. Imagine a facebook application which would allow you to list your favourite pick n’ mix items? Not only would this allow you to share your favourite combinations with friends, but also allow their friends to purchase that combination with a single click as an impulse buy?  @team_woolies – if you need help, let me know!

Finally – “Is it wrong to spend £5 on pick n’ mix from Woolworths?” – I was taken away in the moment, the hype and my joy of sweet things… so I hope not.