I’m all for applications providing users with a streamlined experience, reducing clicks and the amount of dialogs they have to confirm to get the job done. However, sometimes it can go a step too far.

Today, I had to buy a printer. Came home, plugged it in and Windows 7 happily installed the correct drivers – job done. Not quite. Sadly I had left Word open in the background. After continuing to do work on the document, AutoRecovery kicked in and saved the file. At this point I was shown the following dialog. 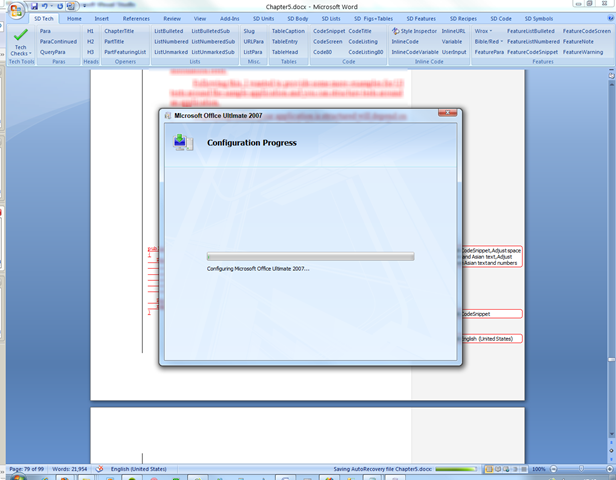 Instantly I had to stop, take a step back and wonder what I had done to cause this to happen. I was confused, and confusion is very bad for a user. I had no indication of what was happening, how long it would take or why it had happened in the first place. I can only assume it was related to the installation of the printer which caused Word to reconfigure itself.

To make matters worse, after it had completed I was then shown this dialog. There is no reason why Word should need me to reboot my machine.

Clicking no was my natural reaction given the choice as I was in the middle of working. Word had other ideas.

At this point it had back round the cycle at which point I caved and accepted the reboot. After receiving random errors, Word informed me it could not save my work resulting in a loss of work.

Lessons to take away from this.

1) If the action the application is taking is uncommon or could cause the user confusion – tell them. It would actually have been nice to have a dialog saying – “Sorry, we need to do some configuration as your printer settings have changed.”

2) At which point, I should have been given the option of ‘Now’, or ‘When I close Word’. Actions such as configuration are best performed when the user closes the application as they have finished their work and as such won’t mind the delay.

3) If they don’t want the action to happen – make sure you can cope. In this situation Word obviously couldn’t.

4) Finally, always think about how the user will feel when the dialog pops up or an action is taken without their consent.