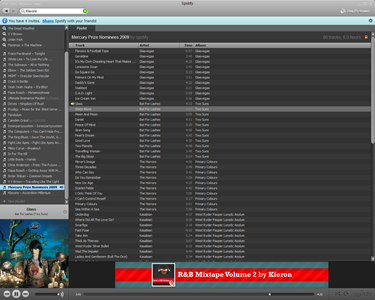 I think Spotify is an amazing service! Spotify have millions of tracks available for you to start listening to over the internet for free! It’s very simple to use, very quick and has a great collection of music – it is now rare that I even have to access my local mp3 collection!

In the UK we have a Mercury Prize for album of the year. 12 albums are nominated, some of which I would have already have listed too but generally there are one or two bands I’ve never heard of. Previously, I would have had search (generally MySpace) to find out more information about these bands and listen to their music.

Today I was reading the Spotify blog and noticed they have put together a playlist of the albums nominated for the prize. Instantly I had a wow moment. They had taken their existing infrastructure and provided something cool, with very little effort or cost to themselves. I can now listen to the artists entire album instead of attempting to find one or two tracks!

The reason for the post is that sometimes you don’t need to implement massive, expensive, features to make users happy.  Sometimes the little touches can make just as much impact. Having the playlist made me happy, it made it easier to access to music which I was interested in. As a result I was compelled to tell people.

If you look beyond making users happy, Spotify could now sell ads based on this playlist – promoting gigs for the artists or even just having the playlist ‘branded’ by Barclay who sponsor the prize.

I was a little disappointed to find that Florence & the Machine’s album was not included. Not sure the reasons behind this but it feels very strange. The label have an opportunity to reach new fans via a cool and growing service. More fans results in increased merchandise sales, increases gig ticket sales, more exposure which will increase the likely hood of people actually buying the album and spending money. It’s not always about direct album sales.