This weekend I attended an awesome event called Launch48 at the PayPaleBay offices in Richmond (London). The concept is simple, anyone is allowed to pitch an idea in 1 minute on the Friday evening, this event had around 30 pitches. After this, people vote on which ideas they like. Next the top 12 teams give a 2 minute pitch and Q&A. After a second vote, the 6 top teams start work. Everyone who attended selects a team to help with the aim of having a demoable product and business by 4pm on Sunday. Our team created Given.org, video explaining the idea can be found below.

GIVEN helps companies find and support people’s causes on Facebook.

30 Seconds about Given.org from Given dot Org on Vimeo.

It gives companies the ability to publicly sponsor fundraising initiatives – whether they are being led by employees, fans or customers. This offers companies a new way to engage with people on Facebook and support worthwhile causes.

For fundraisers GIVEN offers a whole new world of potential sponsors beyond their existing network of family and friends. GIVEN helps people raise money from over 20,000 companies that currently have a presence on Facebook.  Luckily, the team had some amazing designers from Evisua.com who created the website below: 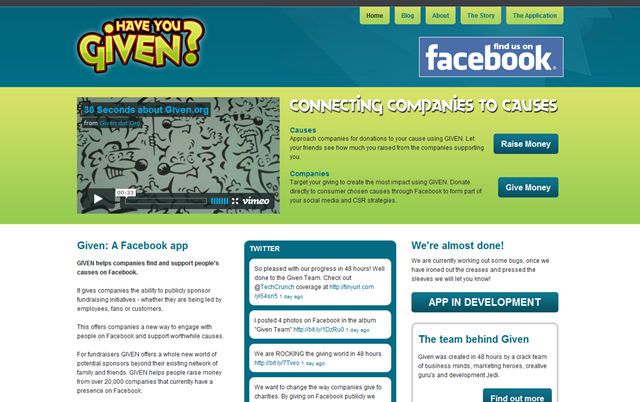 While the designers did their thing, the developers, which I was one of, worked on the facebook application. Creating facebook applications has a small learning curve, but actually pretty straight forward to create once you get started. Our application looked like this after the end of the weekend: 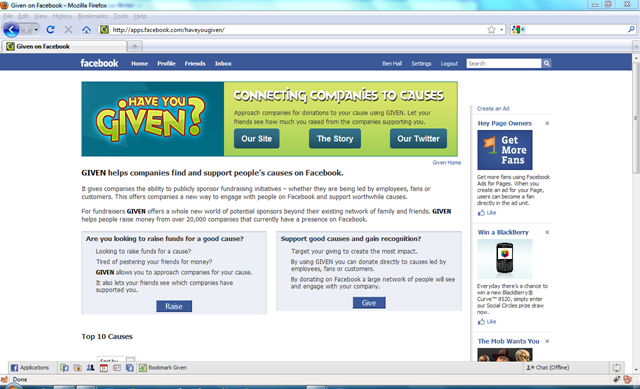 Hopefully you will be hearing more about this in the future, but wanted to give people a heads up into what is happening in and around London. If you want to know about the other five teams, check out the TechCrunch article.