Based on my last post regarding a bad experience installing Flash, today I had two experiences of Windows Vista blocking what I wanted to do.

The first occurrence was when I tried to delete a folder. At this point, Windows Vista happily popped up a dialog saying it was open in another program. This information would have been great if I only had one program open, however I had 3xVS, 3xIE, Firefox, Acrobat, 5xWindows Explorer, 3xCMD, Windows Media Player plus reflector open. 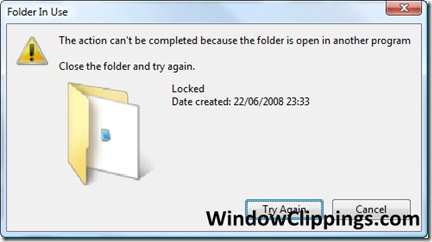 What I would have loved to see is the dialog saying:

“The action can’t be completed because the folder is in-use by the following programs: “
“Windows Explorer – Locked”
“Notepad – SomeTextFileInsideLocked.txt”
“Close programs and try again.”

I would have got the same error, but I would have just enough information for me to understand what I need to do in order to complete the action. Turns out the folder wasn’t open, but a file inside the folder.

The same is true when I try and eject my USB Pen drive.  If Windows had told me which applications was using the device, I would have been in a position to do something about it constructively, instead of closing possible applications in an attempt to close the correct one.

Of course, it could have been worse: 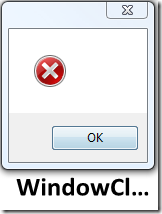 In summary if you have to display an error message, display enough information to allow the user progress instead of just blocking them and leaving them to work out what they did wrong. Error messages saying the user has done something wrong with no indication of what provides them with an unpleasant experience and reflects badly on your application.

You never know, I might get back on and continue some technical posts shortly.