As you may recall, in November I presented at DDD7 in Reading, UK about Pex and the future of unit testing.

Is unit testing about to have a major change? Pex is a project from Microsoft Research which automatically generates a traditional unit testing suite with high code coverage from hand-written parameterised unit tests. In this session, Ben explores the Pex framework, explaining the approach the framework takes and how it computes the test inputs based on your programs execution. Ben demonstrates how to use the framework and how it could potentially change the way we write unit tests.

At the time the session was recorded, with a little help from Liam (thank you!), the session is now available online. I hope you enjoy it!

Slides and code are available to download from here 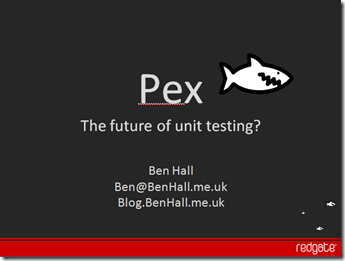 Yesterday, Developer Day (DDD) 7 was held at Microsoft UK. I delivered a presentation on Pex, a new project from Microsoft Research. I provided an introduction into Pex, the problem it attempts to solve, how Pex works in the real world and finally where I think the future of unit testing and Pex is heading.

I had a great day and I was very happy with my session – the demo gods where with me. Based on tweets via twitter and other comments, it was generally well received.  Thank you to everyone who attended, when feedback opens on the website please be sure to leave your comments as they are all taken into account.

DDD7 also had Channel 9 recording all the sessions, if you couldn’t attend – don’t worry, hopefully the videos will be online in the new year!

I received my email last night confirming that my Microsoft Pex session for DDD7 has been selected by you, the voting ‘potential’ attendees! I’m honoured that the session has been voted for, DDD is an amazing conference (registration is free, opening very soon) and based on the tweets from various people, there should be some great sessions.

If you would like a quick overview of Pex before DDD, then I suggest you read my MSDN Flash article.

A quick heads up regarding a short Microsoft Pex article I wrote for the UK MSDN Flash newsletter. If you want a quick introduction, or a link to share with your colleagues then the article can be found here – 01 October 2008- Pex- Automated testing for .NET

On a side note, if you haven’t registered for the newsletter, now is a great time to do soon.  If you sign up before 28th November 2008, you will be entered into a prize draw where you could win a XBox 360 Elite (plus other prizes). Register on the website:

A quick announcement to say that Pex 0.7 has been released. As such, I have also updated the Pex Extensions, which I have blogged about previous, allowing you to generate NUnit, MbUnit and xUnit tests from Pex 0.7.

Read Nikloai Tillmann’s blog for more information on the release.

By default, Pex will generate MSTEST tests, however that doesn’t mean you are constrained to using MSTEST for your project. The Pex Extensions project on CodePlex has a set of extensions which allows Pex to generate code for the three main test frameworks. I’ve just committed some changes to make the code work against the newly released Pex 0.6.  In order to generate tests for a particular framework, you need to follow these instructions.

2) In your test project’s AssemblyInfo.cs. Add the attribute – [assembly: Pex.Xunit.PexXunitPackage]

2) In your test project’s AssemblyInfo.cs. Add the attribute – [assembly: Pex.NUnit.PexNUnitPackage]

2) In your test project’s AssemblyInfo.cs. Add the attribute – [assembly: Pex.MbUnit.PexMbUnitPackage]

Note: At the moment, you need to download the source code from codeplex and compile the binaries yourself, there is a single solution file which will build everything.

You also need to ensure both the extensions and your test project are built against the same version of the unit testing framework, otherwise there will be a type mismatch and Pex won’t be able to generate any tests. 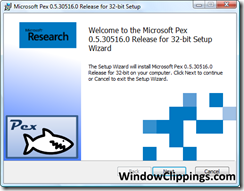 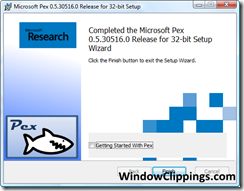 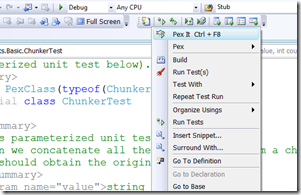 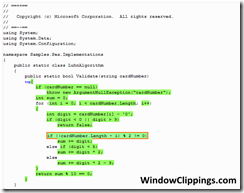 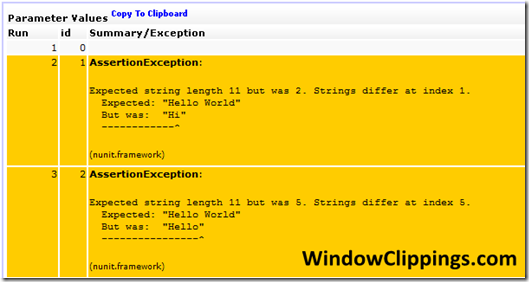